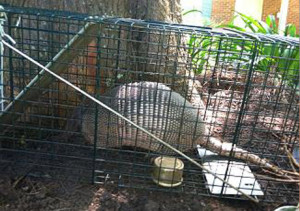 The armadillo is a growing problem to Florida homeowners. Armadillos destroy nicely manicured lawns and flowerbeds. They also burrow under structures which can lead to foundation compromise and collapse.

Armadillos are known to carry and transmit the bacteria known as Mycobacterium Leprae, the cause of leprosy, and are vectors of Chagas disease.

They are an invasive species in Florida and are believed to be brought to North America by Central and South American migrants as a food source. During the depression era armadillos were even called “Hoover Hogs.”

Trapping Armadillos can be time consuming and very difficult. They have incredible forelimb strength and can jump several feet in the air. Armadillos often destroy traps when caged.

Proper trap placement is essential for success when trapping for armadillo. Traps should be placed on active burrows, along feeding tracts, and along game trails.

Armadillos often have several burrows that they travel between throughout the year. This makes identifying active burrows difficult. Often another animal such as an opossum, raccoon, or fox may inhabit an empty armadillo burrow further complicating the matter.

When burrows lead under structures, it is recommended that inactive burrows be sealed with concrete.

Regular monitoring and inspection of property will reveal feeding tracts and game trails. Identification of food and water sites will also aid in locating these sites.

Once located, a trap can be set along these paths using fence style funnels to guide the animal to the trap. Baits and deterrents have limited effect on armadillos and should be used only in conjunction with trapping, if at all. Depending on the situation, 4-6 weeks may be needed to alleviate an armadillo problem.

Contact us for more information on armadillo removal in your area.